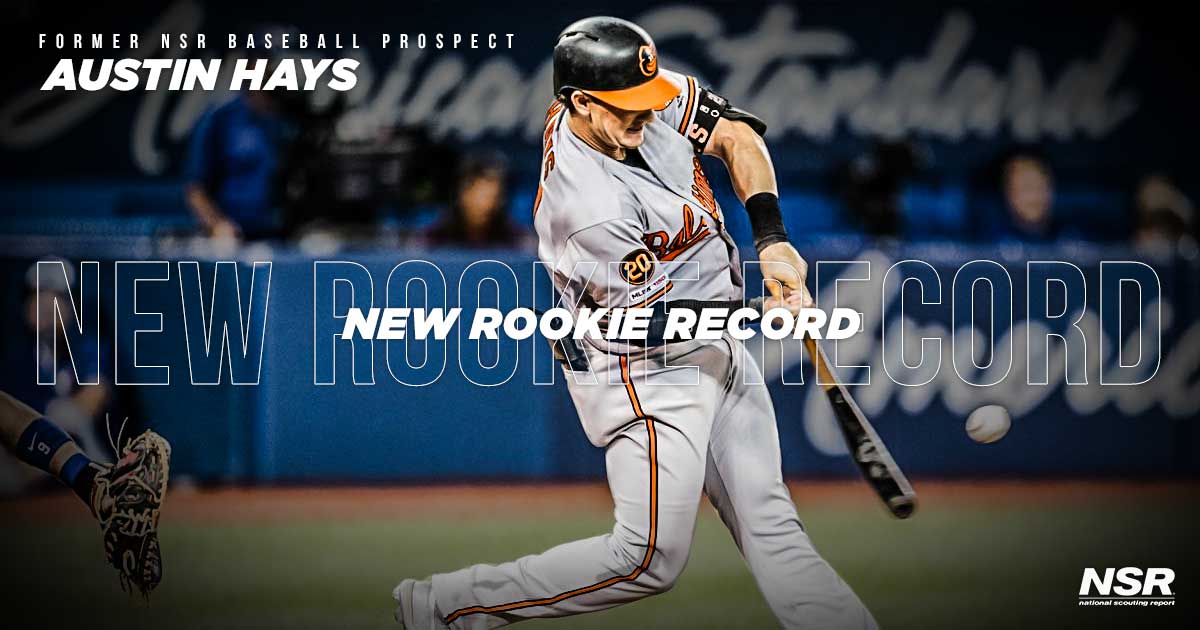 Austin Hays is putting together quite the highlight reel since being called up to the majors. The Baltimore Orioles Center Fielder and former NSR Baseball prospect lit up the scoreboard against the Toronto Blue Jays this week with a rookie record-setting five RBI performance. Hays didn’t just make an impact at the plate. He made his presence felt with 3 terrific defensive plays including a diving catch as he crashed into the outfield wall.

Hays has been rated by MLB.com as the #1 prospect in the Orioles system, but this is no surprise to NSR. NSR Baseball Scout Dave Johnson discovered Austin while scouting in central Florida. When Dave approached Austin’s high school baseball coach, Johnny Goodrich of Spruce Creek High School, and asked about his upcoming prospects, the first words out of his mouth were “Austin Hays.” Coach Goodrich called Austin over to home plate, tossed him a ball, and Austin proceeded to throw the ball 410 feet over the center field fence. “After watching him in practice and in games, I was a believer,” said NSR’s Johnson.

Johnson was not the only believer in Austin’s abilities, his high school coach Johnny Goodrich said, “Austin Hays is the epitome of a student-athlete. In the classroom, he excels in the IT academy with a 4.07 GPA. Austin is the foundation of my team. He is the rock in the middle of my lineup. He has impeccable character, outstanding work ethic, and drive, and he possesses leadership qualities rarely found in today’s young athletes. He will instantly make any team better.”

After Austin enrolled with NSR, his scout Dave Johnson worked closely with Austin and his family to make sure he was following up with college coach requests and being proactive in his recruiting. Austin decided to go the JUCO route rather than moving out of state. His first summer after high school graduation, he worked in the gym every day getting stronger and preparing for the next step. “Nobody outworked Austin,” Dave Johnson explained. “He continued to grow, get stronger, and work on his skills. He has been a total success from that point on. He was the ideal prospect to work with.”

“NSR definitely played a part because I didn’t play in a lot of Perfect Game tournaments and big-time showcases. The videos NSR made helped me get exposure to colleges that would not have seen me otherwise.” – Austin Hays

With the help of NSR and a successful high school baseball career, Hays attended Seminole State College of Florida, where he played college baseball for the Seminole State Raiders. He then finished his college career with Jacksonville University. The Baltimore Orioles selected Hays in the third round of the 2016 Major League Baseball draft. The Orioles promoted Hays to the major leagues on September 5, 2017, making him the first 2016 draftee to reach the major leagues.

Stories like Austin’s are familiar for National Scouting Report. NSR’s nationwide network of on-the-ground scouts specializes in finding undiscovered talent in all sports. Recruiting budgets and the time college coaches are allowed to recruit off-campus is shrinking every year. College coaches trust NSR to be a valuable piece of the recruiting process. For 40 years NSR has helped connect college coaches with prequalified student-athletes.

If you would like to be evaluated by one of our scouts, click here to get your free evaluation.

Why College Transfer Rates Are Climbing
Why College Coaches Don’t Trust Parents
What You Need to Know As An International Athlete
What Are Your Athletic Scholarship Options?