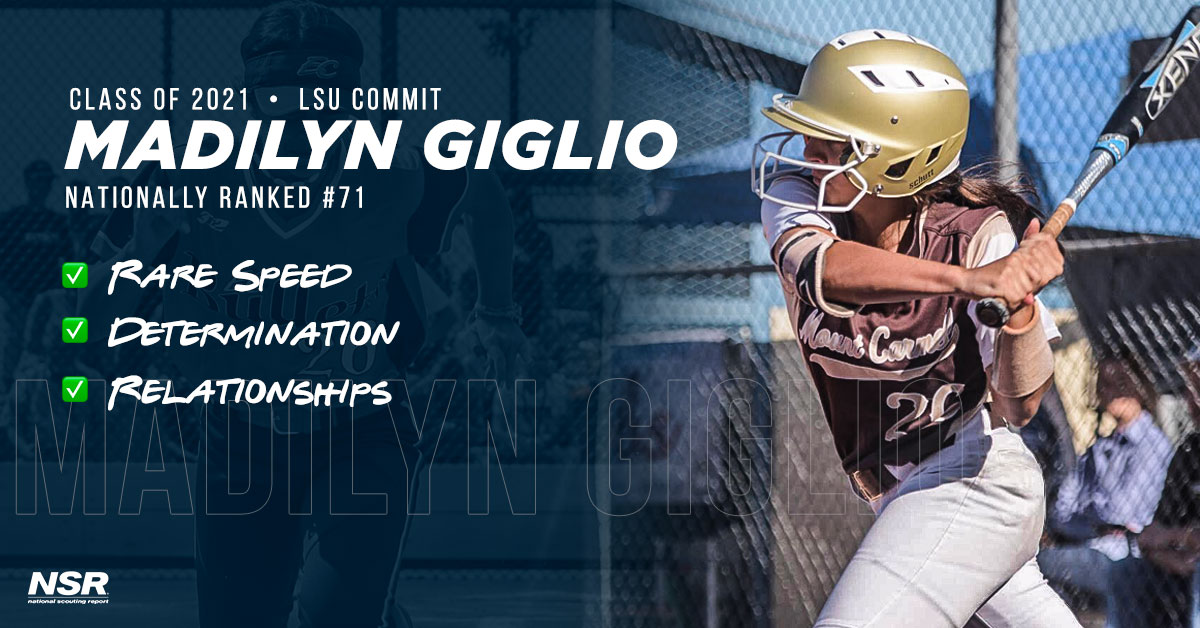 Speed kills! We’ve all heard it, witnessed it, and yet – most in the recruiting process for softball still don’t understand one simple concept: speed alone, like any other aspect of recruiting, will not get you recruited! But Madilyn Giglio is more than just a rare 2.6 home to first…

A huge congrats from all of us at National Scouting Report (NSR) goes out to 2021 LSU commit, Madilyn Giglio, on being named the #71 “Extra Elite 2021 Prospects in the Country”!

You can read the full rankings article here. Madilyn has been all over the “softball media” over the last year as her recruiting campaign heated up alongside her recruiting with her NSR scout, Coach Mandi Balduf. Now the story of how Coach Mandi discovered Madilyn, is unique and heartfelt, to say the least. Coach Balduf had this to say:

“Back when I was coaching at Christian Brothers University, I was recruiting at the Rising Stars showcase in Florida watching a Louisiana team on the 16u squad. At the time, Madilyn was only in 7th grade and playing for a younger team in the same organization. You could see the SPEED, even then. I quickly hit it off with her dad (Beau Giglio) who was answering my questions about some of the older kids I was evaluating. Fast forward two years and I had made the decision to hang up my college coaching hat after 15 years and left CBU to become a college scout with National Scouting Report (NSR). 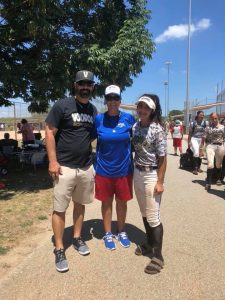 Beau had remembered me and reached out to see if I would be willing to help in her recruitment. Madilyn was something special even back in the 7th grade. She had only been playing softball less than 3 years at the time I began working with her. She was a competitive dancer since the age of 2 and you could see the footwork and body awareness was off the charts for a kid her age.
I had tried unsuccessfully for a year for a top travel team to take notice, let alone take a chance on her. She needed better competition and greater exposure in front of the coaches she dreamed of playing for. Finally, following the JO Cup in STL she was asked to pick-up play for the EC Bullets at the PGF in Cali that next week and this was her debut on the grand stage and she did not disappoint. In just that one weekend, she flew onto your radar and was selected one of the top 100 kids in the 2021 class.

The biggest thing with Madilyn was that she had the fortitude and grind, along with tough skin. The kid has a crazy skillset and I’ve known from day one that she was a P5 caliber kid, and where she belonged. Her and her family have been phenomenal to work with throughout the recruiting process. They followed every step perfectly, and were always ready to do what is needed. Excellent and high achievement is never a mistake but rather, a quality result and habit of those who repeatedly expect it and work towards it.”

Here are some questions we asked of Madilyn:

1. When did you start playing softball?

When I was 10 after dancing competitively for 9 years.

I’ve had so many great memories playing this game and it’s hard to pick just one. However, one of my most memorable moment was when I was asked by Coach JD and Coach Biele to pick up with their team for the PGF, which would lead to me becoming a permanent member. Being a part of the EC Bullets has allowed me to do many amazing things like win a National Championship, travel the country playing the best, and getting the opportunity to commit to my dream school. I am blessed to be a part of this organization.

3. Who would you say have been your biggest role models in the game?

Bailey Landry, AJ Andrews, and Aliyah Andrews are all my role models because I admire the way they play the game. I aim to be on their level one day. Watching them is how I got in to softball and becoming a slapper.

I have always been a LSU fan and grew up watching LSU softball. When I went on my visit this past fall, I immediately fell in love with LSU and everything it had to offer. I especially loved how Coach Beth, Coach Dobson, Coach Lindsay , and Coach Sandra made me feel at home. I loved the players and the facilities and knew this was where I wanted to be and who wanted me!
So from all of us at NSR, congrats Madilyn! On your recent commitment to your dream school (LSU), as well as topping the rankings nationally!