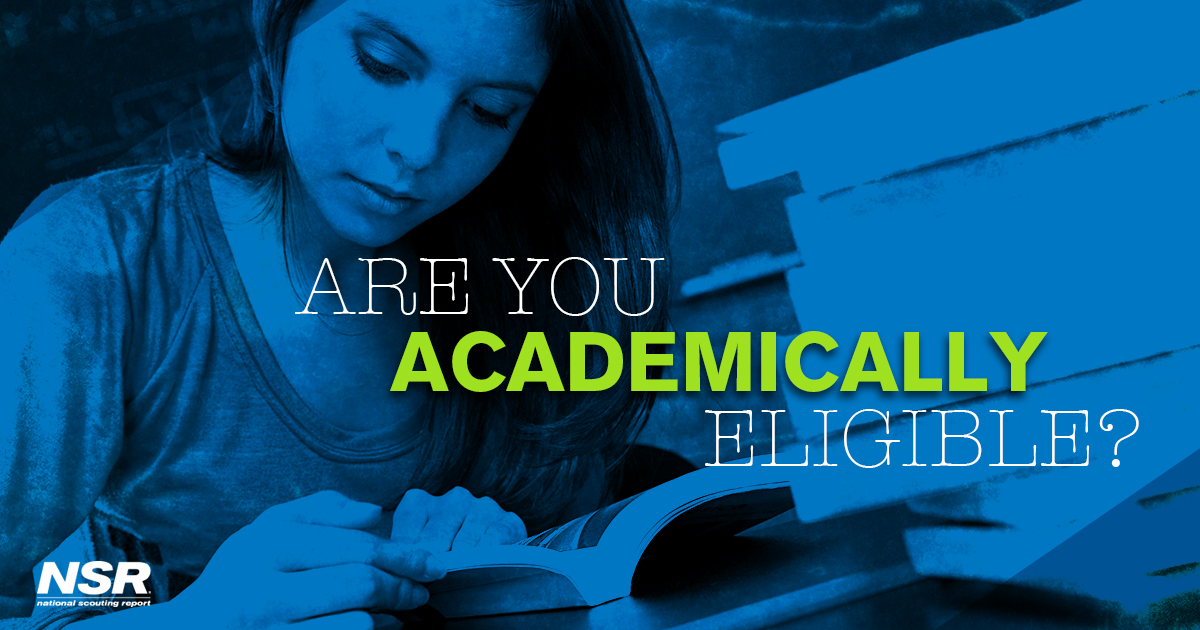 Both the NCAA and the NAIA have a set of requirements that make an athlete academically eligible to play at the next level. For that reason, athletes need to pay close attention to their academic eligibility because it could affect their recruiting.

Many athletes aren’t academically eligible to play in college because they don’t know about the NCAA’s core-course GPA requirement. Typically, athletes tend to take classes to boost their overall GPA, but that doesn’t help them.

Because the NCAA only looks at their core-course GPA. So, it’s crucial athletes, and their families pay attention to their class schedules and the NCAA’s list of core courses.

We encourage athlete’s to start tracking and paying attention to their grades and class schedules as early as their freshman year in high school, especially if they’re interested in being an NCAA DI or DI athlete.

Mostly so they won’t run out of time to complete all of the NCAA’s core course requirements. Also, it gives them time to make sure they’re academically eligible.

Insider Tip: Calculating the NCAA’s core course GPA can be difficult, because of that we’ve broken it down for you here!

Are you Academically Eligible?

Becoming academically eligible is different for all three NCAA divisions and the NAIA, but we have the basics laid out for you below!

DI academic eligibility is probably the most complex and confusing. Below are the basic requirements:

Insider tip: If an athlete doesn’t meet the 2.3 GPA requirement but earns a 2.0 GPA with the equivalent ACT/SAT score they can practice and earn athletic financial aid the entire year. However, athletes can lose their athletic funds and practice ability if they aren’t academically successful in their first term in college.

The NAIA is a much easier process to becoming academically eligible than the NCAA. There are only a few requirements every freshman must have to play at an NAIA institution.

Additionally, athletes must meet two of the following three criteria:

Insider Tip: Student-athletes who earned a 16 composite score on the ACT or an 860 from the critical reading and math sections on the SAT between March 1, 2016, and April 30, 2019, will be accepted.

What if You’re Not Academically Eligible?

Athletes who don’t meet the NCAA or NAIA academic eligibility requirements can go to a junior college for two years. That way athletes can compete while working towards academic eligibility. Additionally, not all junior college athletes are academically ineligible for an NCAA or NAIA institution sometimes it’s because they are unsure of their major or need more time to develop.

The basic academic eligibility requirements for a junior college are:

-> Click here for to learn more about  NJCAA academic eligibility <-

Additionally, athletes have the ability to attend a prep school, which allows them to boost their grades without wasting a year of athletic eligibility. The prep school option is great because athletes can postpone using their 5-year eligibility clock.

What is the 5-year eligibility clock?

Athletes have 5 years to use their 4 years of eligibility. Their eligibility clock starts either the moment they are a full-time student (taking 12 hours) following high school graduation or one year from the time they graduate high school. This is where a prep school could be a good option for those who need an extra year to develop academically or athletically without using their eligibility.

Need help navigating the NCAA or NAIA Eligibility Center? Or have questions about the college recruiting process? Talk to an NSR scout today!

What Are Your Athletic Scholarship Options?
Unofficial Visits Indispensable in the Recruiting ...
Three Things to Consider Before You Verbally Commi...
This is a Simple Breakdown of the NCAA’s New...